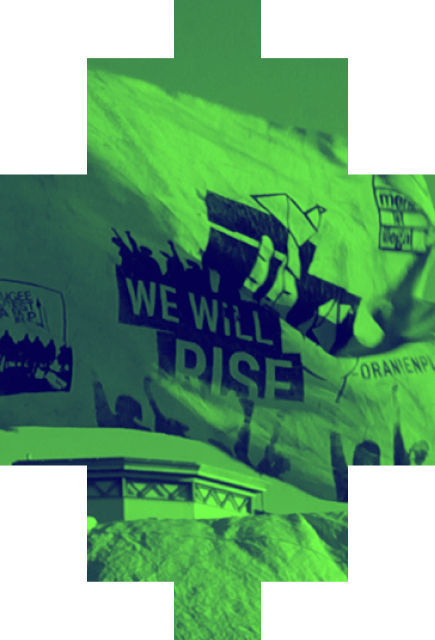 OPlatzBox – The Refugee Movement is the Movement of the 21st Century →

“Colonialism will burn you like the sun on a jackal’s back.”
– Hendrik Witbooi writing to Theodor Leutwein, 1894

…Then the Jackal came where the Sun was sitting. And said: ‘Oh what a pretty girl!’ And he said: ‘Come let me carry you on my back, my daughter!’ And he took her. Then, after he carried the Sun she burned him. ‘O, my daughter, in the name of God let me go, so that I can take you off. Get down first I want to go and urinate’. Then the Sun said: ‘No, I was sitting on the ground.’ Then the Jackal ran and went under a tree. And he dug around the root of the tree. And he went in. Then the Sun said: ‘No, I will not get off. You carried me on your back.’ Then he said: ‘Oh my sister, my back is burning out and I am powerless. I carried you on my back just because of love, but I now realize something about you, so get down from me first.’ At that moment the Sun replied to the Jackal and said: ‘No, I will not get off. I will sit on your back. You carried me on your back. As I am here when my brothers carry me, they don’t ask me to get off their backs. They take me off their backs. Am I not a pretty girl of yours? Why do you want to take me off now? Let us get to your home.’

The Jackal and the Sun is a popular children’s tale that was transformed many times as it was passed on orally and traveled from the Arabic regions and North Africa and, with influences of the European fable Reynard the Fox, arrived to Southern Africa. The ancient tale of the Jackal trickster getting their back burned from trying to carry the Sun away continues to appear and intervene in the colonial archives of German colonization in Namibia. The voices of Haneb and Wilfred Tjueza, young farmers in Namibia, are recorded telling the story in 1931 to the ears and sound recording device of a white anthropologist.

The story was told in different locations and languages over generations to become an anchoring metaphor for people’s experiences of colonial oppression and injustice. Prominently, Hendrik Witbooi, leader of the Nama people’s resistance against German imperialism, in a letter to Samuel Maherero in 1890, used the metaphor to express his grave concern against signing the so called protection treaty with the German Empire:

“But what you have done now, surrendering yourself over to the government by another, by White people, thinking it is wisely planned that will become to you like carrying the sun on your back.” (Lau 1995, p. 55)

German colonial agreements and contracts were used to bind only one side and later ignored and overstepped by the colonisers at will. With the arrival of the colonising forces, anti-colonial resistance begun, too, in the form of counter-narratives carrying African cosmologies like in Hendrik Wittboi’s letter or in the form of armed resistance by Ovaherero, Nama, San and the Khowesin people against their dispossession and displacement. The violent colonial war and genocide in Namibia was the response by the German Colonial Empire to this anticolonial struggle.

What does it take, for the Jackal, to leave the Sun?

The transnational exploitative relations created by German colonialism persist to this day, albeit often in a new guise. The continuous, intersecting systems of domination live on not only along economic lines, but through cultural and social structures. Restitution and redistribution of stolen land and cultural artefacts as well as reparations for the countless dead are mostly absent, the unspeakable traumas of colonialism are present all around. Thousands of bodies of ancestors of many African communities to this day remain in the basements and archives of German museum and university collections: without a grave, without a memorial.

“Germany is in violation of its human rights obligations under the International Convention on the Elimination of All Forms of Racial Discrimination. The repatriation of ancestral human remains is a human and fundamental right of those persons whose human remains are stored in the archives of German institutions in an inhumane manner, and of their descendants.” – Sarah Imani

On the occasion of the first return of twenty bodies that had been despoiled during the colonial war in Namibia for scientific research in Germany, to Windhoek in 2011, practices of repossession were carried out by a delegation of representatives of the descendants. Through an interaction of speeches, sartorial, and site-specific performances at the Charité and other sites in Berlin, the delegation activated memory in a reciprocal exchange between ancestors and the living that opened up new relationships to the self and the collective. When The Jackal Leaves The Sun takes inspiration from these embodied forms of building memory through repossession as procedures to reclaim bodies and counter the violent dispossessions of colonialism.

When the Jackal leaves the Sun aims to amplify descendants’ and indigenous communities’ demands for return, repair and land redistribution and to foster artistic and political forms of countering colonial dispossessions on a cultural, educational and spiritual level.

Like the Jackal’s marks from the Sun, our cultures and ecologies, our relationships and economies are marked by colonialism. When the Jackal leaves the Sun connects an intersectional spectrum of artists, curators, activists, lawyers, cultural practitioners and collectives, to create interventions and pedagogical tools that attend to both the processes that led to the historical catastrophe of colonialism and to the powerful legacies of anti-colonial resistance.

Grounded in radical Black, queer and feminist positions, the project’s objective is to decenter restitution discourses and practices of hegemonic institutions and move toward the co-creation and dissemination of pedagogies of repossession.

To achieve this, When The Jackal Leaves The Sun creates an independent and transterritorial infrastructure and platform for artistic and transdisciplinary collaborations on memory, cultural and educational work from summer 2022 to spring 2024 in Nairobi, Windhoek, Kigali, Dresden, Dar Es Salam, Dakar and Berlin.

This will close in 2 seconds

This will close in 0 seconds

We use cookies on our website to give you the most relevant experience by remembering your preferences and repeat visits. By clicking “Accept All”, you consent to the use of ALL the cookies. However, you may visit "Cookie Settings" to provide a controlled consent.
Cookie SettingsAccept All
Manage consent

This website uses cookies to improve your experience while you navigate through the website. Out of these, the cookies that are categorized as necessary are stored on your browser as they are essential for the working of basic functionalities of the website. We also use third-party cookies that help us analyze and understand how you use this website. These cookies will be stored in your browser only with your consent. You also have the option to opt-out of these cookies. But opting out of some of these cookies may affect your browsing experience.
Necessary Always Enabled
Necessary cookies are absolutely essential for the website to function properly. These cookies ensure basic functionalities and security features of the website, anonymously.
Functional
Functional cookies help to perform certain functionalities like sharing the content of the website on social media platforms, collect feedbacks, and other third-party features.
Performance
Performance cookies are used to understand and analyze the key performance indexes of the website which helps in delivering a better user experience for the visitors.
Analytics
Analytical cookies are used to understand how visitors interact with the website. These cookies help provide information on metrics the number of visitors, bounce rate, traffic source, etc.
Advertisement
Advertisement cookies are used to provide visitors with relevant ads and marketing campaigns. These cookies track visitors across websites and collect information to provide customized ads.
Others
Other uncategorized cookies are those that are being analyzed and have not been classified into a category as yet.
SAVE & ACCEPT